Mountain Gorilla Parks in Africa: Where to Go Gorilla Trekking in Africa 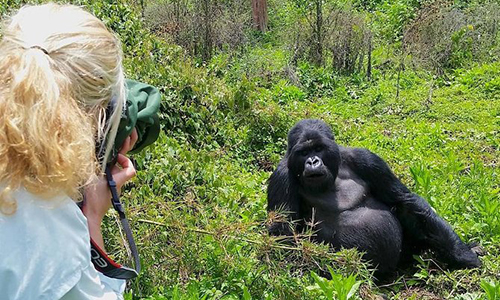 In the world over, there are roughly 1000 mountain gorillas living and almost half that inhabit in the jungles of the Virunga Mountains in central parts of Africa. These mountain gorillas live on green vegetation found on volcanic hills of Rwanda, Uganda and in the Democratic Republic of Congo areas. However in the Congo areas, the gorillas have seen a considerable human violence from which they have not run away unharmed.

In order to see mountain gorillas in Rwanda or Uganda, one has got to book well in advance a gorilla trekking permit to be able to visit the gorillas in their natural jungles. In Rwanda, Mountain gorillas are found in the Volcanoes National Park which is part of the vast Virunga Mountains that stretch astride Rwanda, Uganda and DR Congo. Around the volcanoes National Park, there are several accommodation facilities where gorilla visitors usually stay in preparations and anticipation for a thrilling gorilla tracking experience in Rwanda. A Rwanda Gorilla Trekking Permit is an USD 1500 and is booked and obtained able through a reliable tour operator (company) which eventually organises a gorilla tour for you.

In Uganda, Mountain gorillas are found in Bwindi Impenetrable Forest in south western Uganda in the districts of Kabale and Kanungu. A Uganda gorilla trekking permit is at USD 700. Like in Rwanda, a gorilla tracking permit for Uganda is also booked through a tour operator who finally prepares the whole gorilla tour.

The DR Congo shares the least population on the total mountain gorilla numbers in the whole world. Because of the unstable Eastern DR Congo due to various militia factions, gorilla trekking has not been possible for some good time. So, the gorillas there remain un-trekked for security reasons. This leaves Uganda and Rwanda as the only two countries where gorilla trekking is safely and soundly done.

Numerous conservation creativity are destined to help mountain gorillas and it is thought that their population may be stable or gradually cumulative. Despite the efforts, the mountain gorillas remain facing major dangers from habitation loss and poaching.

Through Gorilla Trekking Services, you are at liberty to book a gorilla trekking permit for Rwanda gorilla tours or Uganda Gorilla Safaris at best. Besides gorilla trekking, you will also tour several attractions in both countries that include wildlife safaris, community tours, nature walks plus several sporting acting done along or near the Nile River.

4 Places Where Gorillas in Africa are found.

Bwindi Impenetrable Forest in south western Uganda is one of the 4 places in Africa and on the whole globe where people can go for gorilla trekking tours. This park in Kanungu District is on the edge of the Albertine Rift, the western branch of the East African Rift and at elevations ranging from 1,160 to 2,607 metres. The park divided into for gorilla trekking sectors of Bhuma, Ruhijja, Nkuringo and Rushaga sector has 19 gorilla families habituated for trekking by tourists. Bwindi is also believed tto be a habitat for almost half the number of the endangered mountain gorillas remaining in the world today. A permit to go and see gorillas in Bwindi is at USD 700, a price that is also charged for a similar for Mgahinga.

Mgahinga National Park is one of the two gorilla national parks in Uganda and the four habitats for these primate species in Africa and the entire world. This 34-sq-km park features mountain gorillas and golden monkeys plus the 3 extinct volcanoes including Mount Muhabura, Mount Gahinga, and Mount Sabyinyo. Gorilla tracking the park’s only gorilla group, Nyakagezi family is the major activity in tourist attraction. The park can be accessed from Kigali in Rwanda as its closer to the border or from Entebbe Airport. From this airport, visitors can take an inland scheduled flight or charter to Kisoro and transfer to Mgthe park. Another transfer alternative is by road from Kampala to Mgahinga.

This park is the only gorilla habitat in Rwanda where all gorilla trekking safaris take place. The park in northwestern Rwanda. It covers 160 km² of rain forest and encompasses five of the eight volcanoes in the Virunga Mountains and they include Karisimbi, Bisoke, Muhabura, Gahinga and Sabyinyo. Apart from visiting mountain gorillas, other Things To Do In Volcanoes National Park entail golden monkey trekking, Hike a volcano and taking cultural tours. A Rwanda gorilla permit for tracking gorillas at this park is at USD 1500, a price that has been like that since 2017. All gorilla trips to the Volcanoes start from Kigali, and usually, they can be for 1, 2 or 3 days. The park has accommodation of all categories including luxury, midrange and budget lodges.

Virunga National Park is a national park in the Albertine Rift Valley in the eastern side of the Democratic Republic of Congo. The park was created in 1925 and is among the first protected conservation areas in Africa. In elevation, it ranges from 680 metres in the Semuliki River valley to 5,109 m in the Rwenzori Mountains. Mountain gorilla trekking is the main highlight of Virunga national park which also feature Mount Nyiragongo, Mikeno Volcano and Nyamuragura.