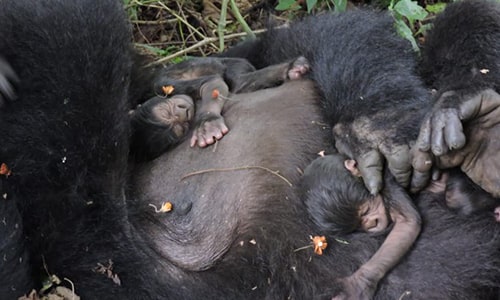 Virunga National Park authorities have announced the birth of twin baby gorillas, a development that has increased the number of primates in the wildlife reserve.
“We’re excited to announce that Gato from the Nyakamwe family has just given birth to twins!,” read the Tweet message from the official Twitter Account of the Virunga National Park on 22nd September 2020.
Virunga National Park is Africa’s oldest national park and is also the continent’s most biologically diverse protected area.

The Virunga park has over the months recieved baby gorillas and thanks to the strong conservation efforts by different stakeholders locally and globally.

Despite long periods of civil unrest in the region where mountain gorillas live, conservation efforts have achieved success out of their campaign. Discoveries indicate that gorilla populations in the Virunga Massif have grown to 604 individuals up from 480 individuals in 2010 putting the total global population to over 1,000 individuals.

Virunga National Park is Africa’s oldest national park and is also the continent’s most biologically diverse protected area. The park provide a haven for threatened wildlife including mountain gorillas. Many other vulnerable and endangered species dwell within the park’s precincts such as elephants plus several threatened species including the hippos.

Gorilla trekking is the major tour activity in the gigantic park found in the eastern side of the country. Other activities in the park also include chimpanzee habituation, nature walks, Mount Nyiragongo hiking and landscape viewing among others. Gorilla tours in Congo usually begin from Kigali in Rwanda and include packages of 2, 3 and 4 days. Other places to find mountain gorillas in Africa include Bwindi Impenetrable National Park and Mgahinga Gorilla National Park in Uganda. These endangered primates are inhabit the Volcanoes National Park in Rwanda. Gorilla tourism at large is a major factor that has made mountain gorillas given attention by humanity.